On Drones, the Fog of War and Obama vs. LeMay

“How much evil must we do in order to do good?”

It’s a question posed by Robert MacNamara in Errol Morris’s 2003 documentary The Fog of War, and one I’ve thought a lot about in these past weeks as the debate over our drone policy has escalated–most recently, with Tuesday’s release of top-secret intelligence which outlines just how casual our overseas killing policy has become.

The summary of intelligence reports from McCLatchy Newspapers debunks many of Obama’s assertions in the past, including the idea that drone attacks minimize (or even negate) civilian casualties. Also, that they target only “specific senior operational leaders of al Qaeda” who are plotting “imminent” attacks on Americans. As it turns out, al-Qaeda members are a mere minority of total drone casualties—and senior al-Qaeda leaders are killed only rarely. In fact, sometimes our drone operators aren’t really sure who they are killing.

In some ways, the McClatchy report seems to posit a whole new world, policy-wise–particularly since it follows a New York Times story that our Pakistan drone program was launched only after the C.I.A. agreed to assassination of a Pashtun tribal leader the Pakistan government wanted dead. And yet as someone who has spent much time immersed in Pacific War lore over the past couple of years, there’s a lot about this conflict that feels eerily familiar. Sure, the technology has changed, and along with it the vocabulary: surgical and signature strikes, pinpointed targets, remote pilots. The truth, however, is that we have taken comparable technological leaps in the past, and skirted the same ethical questions about civilian deaths. On March 9th 1945, 334 bombers—each representing an investment of a half-million dollars, each a pinnacle of the time’s airpower technology—took off at dusk from the recently-captured Marianas, on a mission dubbed “Operation Meetinghouse.” By midnight the planes were swarming over sleeping Tokyo. Air raid sirens wouldn’t sound until well after the attack began, but most Japanese gave the droning engines little thought. In past months American flyovers had been both common and harmless enough that they were referred to almost affectionately, as “our regulars.”

Meetinghouse, however, proved devastatingly irregular. Not only was Tokyo constructed largely out of wood and paper, but LeMay had ordered the planes in at unprecedentedly low altitudes—between 4,500 and 8,000 feet—to accomplish what he called precision bombing. Between that, the 1165 tons of petroleum-packed explosives the planes carried (another first: napalm) and a brisk Northwesterly wind, the attack created one of the fiercest infernos ever seen in a city. “People were burning alive right in front of me,” Yoshiko Hashimoto, a survivor, told me. “Women’s hair was on fire. Men’s clothing was on fire. There were so many people rolling around on the ground.” The American pilots would recall smelling acrid smoke and burning flesh from their cockpits. Returning to base, they’d scrape soot from their plane’s bellies.

Like our ongoing overseas drone strikes, Operation Meetinghouse was orchestrated and carried out by a small handful of military brass, without congressional or even presidential oversight. Its masterminds included Major General Curtis LeMay as well as MacNamara, at the time a captain in the Office of Statistical Control. It’s ostensible goal: to decimate Tokyo’s industrial military complex. The latter was said to be inextricably intermeshed with civilian life, since some residential areas also housed “shadow factories” that produced prefabricated materials for Japan’s aircraft factories.

At least a hundred thousand Japanese died between midnight and dawn that night—over three times Dresden’s death toll, and significantly more than the initial tolls in either Hiroshima or Nagasaki. Sixteen square miles of city were incinerated. In the days afterwards LeMay was hailed as an airpower superstar. “I want you and your people to understand fully my admiration for your fine work,” General Hap Arnold wrote him.  “Your recent incendiary missions were brilliantly planned and executed.” If he or anyone else had serious qualms about the fiery deaths of tens of thousands of civilians, they were left unsaid–though a follow up XXI’st Bomber Command report seemed slightly defensive on the topic. “The object of these attacks was not to indiscriminately bomb civilian populations,” it noted. “The object was to destroy the industrial and strategic targets concentrated in the urban areas.” 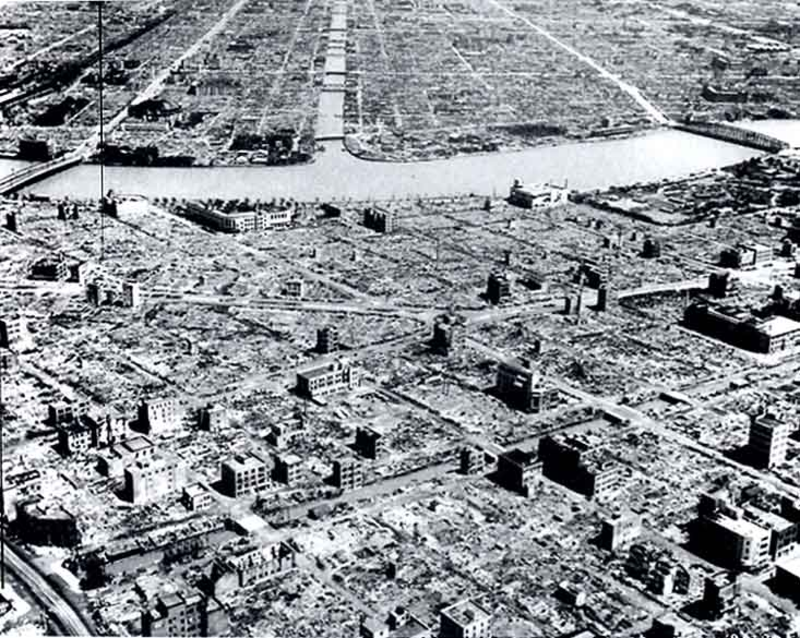 In truth—and as both LeMay and Arnold were quite likely aware—Japan’s military-industrial complex had already been badly damaged by a year-long U.S. Naval blockade. In short, they were lying about who and why they were so “precisely” striking—or at very least, misrepresenting the truth. Yet both the press and the public bought their argument; there was little media coverage and even less debate. In fact even today the Tokyo firebombing remains deeply in the shadow of the atomic bombings that followed five months later. And yet the questions it raises remain strikingly relevant seventy years later, as we consider when, how and who our drones should kill.

Take, for example, the idea that civilian casualties are a legal, acceptable, and even inevitable consequence of a “just” war—something implicit in the arguments of both George Bush’s and Barak Obama’s administrations. Initially LeMay rationalized the Tokyo attack in the same way. “The entire population got into the act and worked to make those airplanes or munitions of war,” he claimed. “We knew we were going to kill a lot of women and kids when we burned that town. Had to be done.”  I thought of this comment when reading Dexter Filkin’s New Yorker article earlier this year, in which he recalled talking to American officials about the 2009 drone strike in Al Majalah, Yemen. The attack killed fourteen Al Qaeda militants and forty-one civilians, and the officials “felt bad about it,” Filkins wrote. “But the aerial surveillance, they said, had clearly showed that a training camp for militants was operating there.”  In other words, militancy in Yemen was so enmeshed with civilian life that it was impossible to hit one without hitting the other.  Had to be done.

And yet the architects of Al Majalah–like those of our Pakistan program–may look back on their handiwork with less certainty then they now profess. After all, both LeMay and MacNamara did: “LeMay said if we lost the war that we would have all been prosecuted as war criminals,” MacNamara reminisces in The Fog of War. “And I think he’s right. He … and I’d say I … were behaving as war criminals.”

Something else to consider: for all of the napalm and flame we unleashed on Japan’s cities—burning hundreds of thousands of civilians to death in the process–there remains little evidence that those operations (as opposed to the surreal devastation wrought by Fat Man and Little Boy) brought our enemy closer to capitulation. Indeed, it’s possible they did the opposite—just as Japan’s bombings in China and Germany’s blitzes on London arguably strengthened the will of those besieged populations to fight on. And just as, by many accounts, our drone strikes in Pakistan and elsewhere are fueling recruitment by militant groups—and are almost certainly fueling anti-Americanism.

To be sure, there are some big differences between the Pacific War and our War on Terror. For one thing, there’s little question that drone strikes cause fewer casualties than city-wide firebombings.  And while CIA Director John Brennan’s 2011 claim that “there hasn’t been a single collateral death” by drone has proven to be offensively inaccurate, the general estimates for drone-related civilian casualties generally range between the mid- to the high-hundreds (a figure chillingly humanized in this recent online infographic, “Out of Sight, Out of Mind”). Moreover, drone attacks put virtually no American lives at risk — unless, of course, you count the Americans at whom we target them.

But whether we are talking hundreds of civilian deaths or hundreds of thousands, the central narrative remains the same. Once more, we are summarily executing people whom we think might be our enemies. We are calling that “justice,” and then rationalizing untold numbers of civilian deaths in the name of that “justice.” And once more, a small group of highly-placed men–led by Barak Obama himself–are doing both the deciding and the killing. And then misleading us about it. Which leads me to think that once the fog of this war has lifted, we’ll confront another quandary MacNamara poses in Morris’s documentary: How much evil must we do in order to do good?

If the lessons of the LeMay’s firebombings are any indication, the answer will likely be: far too much.